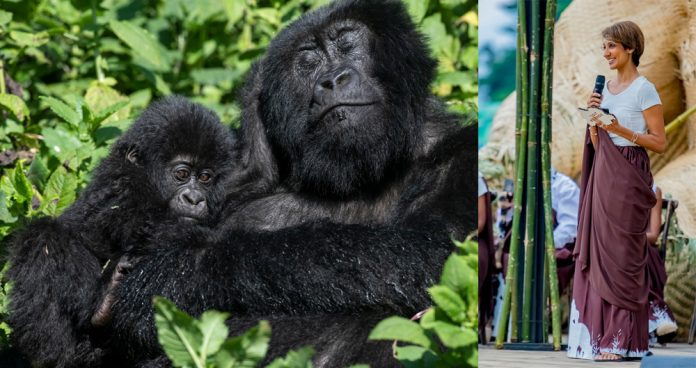 Sri Lankan entrepreneur, philanthropist and animal rights advocate Otara Gunewardene was invited by the Rwandan Government as an honorary guest to name a baby Mountain Gorilla at the annual Kwita Izina naming ceremony.

The ‘Kwita Izina’ baby Gorilla naming ceremony, held on the first Friday of September every year, is based on a traditional Rwandan naming ceremony held for new born babies and has been a part of the Rwandan culture for centuries. The infant Gorillas are named by conservation, business, sports, fashion and show biz icons from around the world.

It was introduced in 2005 to raise awareness of conservation efforts, as the Government of Rwanda, through the Rwanda Development Board, has achieved great success in protecting the endangered Mountain Gorilla population and has worked diligently with conservation partners, the private sector and the community to conserve their natural habitat.

Before the introduction of the ceremony, infant Gorillas were named by park rangers, researchers and scientists, following in the footsteps of late American primatologist and conservationist, Dr. Dian Fossey, who named all the Gorillas she was studying back in the 70’s in order to accurately observe and learn about them.

This year, thousands of Rwandans and conservation champions gathered at Kinigi, Musanze, on the foothills of Volcanoes National Park to celebrate the 15th Kwita Izina baby Gorilla naming ceremony, aimed at raising awareness about Rwanda’s conservation efforts. It was attended by 1000 VIPs from around the world, 4000 invitees and 30,000 members of the community in Rwanda. All the honorary baby Gorilla name-givers were also given the opportunity to trek through the mountains and visit the Gorilla family they will be naming in their natural habitat.

The event generally spans a week and includes special activities related to conservation, educational exhibits and community projects held in the capital city of Kigali.

Otara Gunewardene was chosen for her philanthropic and environmental advocacy work through her charitable organizations, Embark and the Otara Foundation. Embark focuses on improving the lives of street dogs in Sri Lanka, while the Foundation aims to conserve Sri Lanka’s environment and wildlife, to not only protect Sri Lanka’s rich biodiversity but to educate future generations to conserve what makes Sri Lanka truly unique.

“It is an honour to be recognised by the Rwanda Development Board and to be given this opportunity,” Ms Gunewardene said. “Having visited Rwanda with my family last year to address local entrepreneurs at the First Lady’s Imbuto Foundation, I was impressed by the successful conservation efforts undertaken by the country to save, not only the Mountain Gorillas, but their entire eco system as well.”

“These magnificent animals share 99 per cent of our DNA, but were expected to be extinct by the millennium due to detrimental human activity. The incredible efforts by the Rwandan government led by President Kagame, for whom conservation is a priority, is something to be admired. As a passionate wildlife enthusiast and conservationist I am so pleased to be a part of the Rwandan government’s efforts to protect the mountain Gorilla population.”

Otara Gunewardene, a mother of two, had the pleasure of naming the newest member of the Pablo family, Kira, derived from the names of her two sons, Kiran and Rakhil, which also means “bless you” in Kinyarwanda, the Rwandan language. As a result of Kwita Izina and other conservation efforts, the population of the endangered Mountain Gorillas has increased to 604 in 2016 in comparison to 480 in 2010 and the region’s lowest of 242 in 1981.

“As we give names to 25 baby Gorillas today, we celebrate our conservation successes and thank the community, partners and friends from around the world for their invaluable support to protect these remarkable animals. And while Mountain Gorillas remain an endangered species and more work is needed to ensure their long-term survival, the most recent census tells us that the Mountain Gorilla population in the Virunga Massif has grown by 23% since 2010 to 604 individuals. This success is the result of governments, communities and conservation partners working hand-in-hand to protect the species and its habitat”, remarked the Rwandan Development Board’s Chief Tourism Officer, Belise Kariza.

This unique species of Mountain Gorillas has been listed as an endangered species by the International Union for Conservation of Nature (ICUN) since 2006 and are found only in national parks across Africa, in Bwindi Impenetrable National Park and Mgahinga Gorilla National Park in Uganda, Volcanoes National Park in Rwanda and Virunga National Park in the Democratic Republic of Congo.

Today, Kwita Izina serves as a platform to celebrate the importance of conservation and the role of sustainable tourism in protecting Africa’s rare and endangered species. 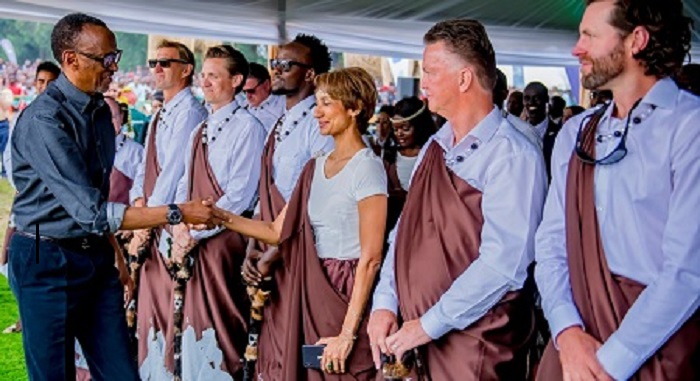