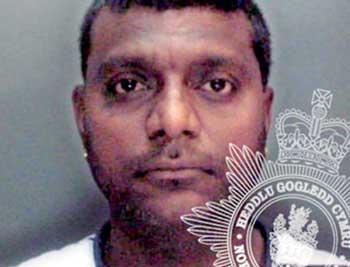 A 41-year-old Sri Lanka man with British citizenship from Northern Wales has been jailed by the Caernarfon Crown Court for his part in a multi million dollar email scam ,ITV news reported on Tuesday.

This suspect Michael Kinane was involved in conning an American company out of almost $8 million in 2018. He was arrested at the Gatwick Airport in August last year following a joint investigation carried out by Northern Wales Police and the FBI.

Kinane was sentenced to seven years and eight months after pleading guilty to conspiracy to launder money and other fraud offences. Kinane hacked the email of a London-based company from his home in Porthmaog. Fake emails were then sent to people within the American company fell victim to the scam. The emails asked for payments for legitimate work and to be sent to new accounts. One of these accounts belonged to Kinane. A sum of $7.8 million was paid to the accounts in early November 2018. Over the next few days the money was distributed to accounts in Poland,Germany,Hong Kong,China and Malaysia. Kinane had spent significant sums of money on a television set, a leather jacket designer sunglasses as well as Tag Heuer watch valued at €4,500.

After years of driving a VW van, he was seen driving a white Mercedes in Porthmadog. He also spent money on a trip to Dubai in early December 2018, arriving Australia for New Year’s Eve. After a joint investigation with the FBI and North Wales Police, Kinane was arrested on August 8, 2019 after flying back to the UK via Turkey. He was charged with Conspiracy to Launder Money and three offences of Fraud by False Representation.

North Wales Police obtained banking documentation on 32 bank accounts belonging to Mr.Kinane. After a 13 month investigation, more than $1.5 miilion has been returned to the victim company. That leaves around $6.2 million outstanding. Detective Chief Inspector Brian Kearney, senior investigating officer said Fraud is the most commonly experienced crime in the UK. “In the last crime recording year, there were over 4600 frauds in North Wales reported to Action Fraud representing an €8.9 million loss. Buisnesses and high-net-worth individuals are noe being increasingly targeted due to their larger financial transactions and greater potential profits for fraudsters.