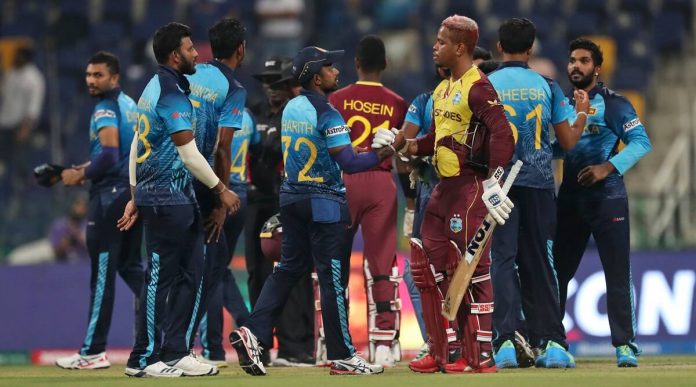 Kieron Pollard’s side went into the game knowing that they needed a big win to give them a chance of qualifying from Group 1.

But Sri Lanka, who already knew they were out of qualification contention, put West Indies to the sword after being put in to bat, with Charith Asalanka and Pathum Nissanka scoring outstanding half-centuries in a daunting total of 189/3.

And in reply West Indies lost both openers Chris Gayle and Evin Lewis in the second over, and never looked like reaching the target, despite lively knocks from Nicholas Pooran (46) and Shimron Hetmyer (80*).

With 190 to get and knowing that a win would only just keep them alive in the tournament, West Indies’ reply got off to an inauspicious start when Chris Gayle fell in the second over, plonking a catch to mid-off for 1 off 5.

Binura Fernando picked up a second wicket just four balls later when the dangerous Evin Lewis chopped on as he looked for a third boundary of the over.

And Sri Lanka struck another blow in the sixth over when Roston Chase was brilliantly caught by Bhanuka Rajapaksa to leave West Indies three down inside the Powerplay.

Pooran, promoted to number three, looked fluent in his 46 off 34, and alongside Shimron Hetmyer gave West Indies a glimmer of hope.

But Pooran’s dismissal in the 12th over ultimately ended the chance of the chase, with Andre Russell, Pollard and Jason Holder all falling cheaply.

Earlier, openers Perera and Nissanka had got Sri Lanka off to a strong start in their final game of the tournament.

But the fall of Perera brought Asalanka to the crease, and the 24-year-old showed attacking intent right from the off and putting on a fine partnership with Nissanka through the middle overs.

The 91-run partnership for the second wicket finally came to an end when DJ Bravo had Nissanka caught on the boundary for 51.

But Asalanka just kept on rolling, overtaking Jos Buttler as the highest runs corer at the tournament before falling in the penultimate over for 68.

Sri Lanka’s win saw them end their tournament in style and with hope for the future, particularly after the impressive individual displays of Asalanka and Wanindu Hasaranga.

But West Indies still have a game to play against qualification hopefuls Australia in what could be the final match of the careers of a number of the West Indian stars.