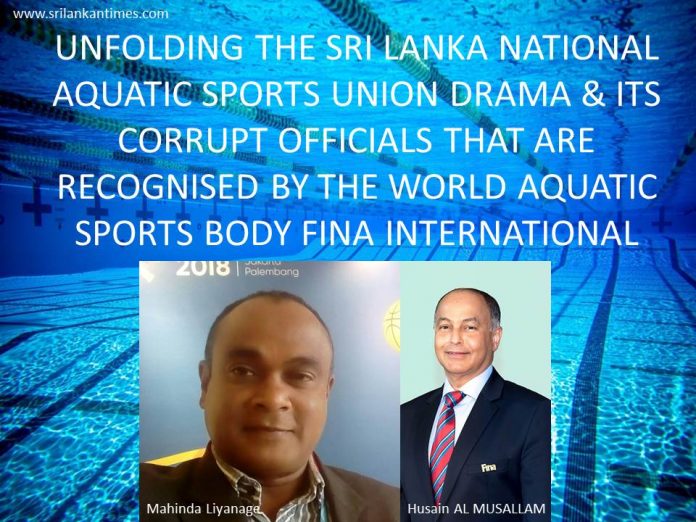 This article and publication cannot be more appropriately timed to coincide with the important visit of the Mr.Husain AL MUSALLAM, President and Head of FINA (Federation De Internationale De Natation) which is the world aquatic sports body.

Interestingly the world governing body has turned a blind eye to the officials of Sri Lanka Aquatic Sports Union with vested and conflicting interest and still recognizes the illegal unlawful corrupt President Mahinda Liyanage. The appointment of Mahinda Liyanage is in direct violation of the Sports Law of Sri Lanka Act No 25 of 1973.

Mahinda Liyanage is Diving Coach by profession. He is the person who is today recognized as President of Sri lanka Aquatic Sports Union by Fina the world aquatic sport governing body in spite of all below.

Mahinda Liyanage is known to be close confidant of Maxwell De Silva Secretary General of the National Olympic Committee of Sri Lanka and the previous President  Hemasiri Fernando as well as incumbent President Suresh Subramanian who have been safe guarding him using their influence with world and international sports governing bodies.

And this was timely stopped but was also supported by Maxwell De Silva who was Secretary General of the National Olympic Committee of Sri Lanka. This is also a clear act of corruption punishable by Sri Lanka Bribery Act section 70.

This is a criminal act, also a clear act of intimidation, unpleasant corruption punishable by Sri Lanka Penal Code.

Godahewa Sumudu Liyanage was not involved in capacity to be entitled for 2018 Commonwealth Games and is an employee of the National Savings Bank.

The Commonwealth Games Accreditation also serves as a visa waiver to enter   Australia hence it was grossly misused and abused by Godahewa Sumudu Liyange with the influence of her husband Mahinda Liyanage.