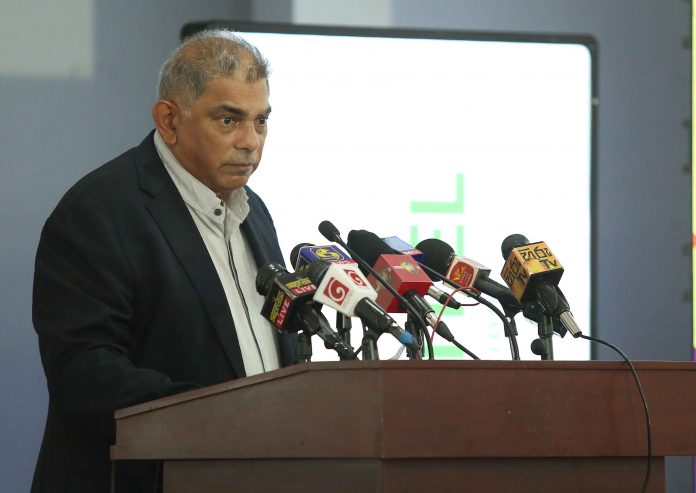 The Group Chairman of Sri Lanka Telecom-Mobitel Mr. Rohan Fernando said that sports journalists need to delve deeper into what is wrong with our sporting capabilities and why we have not maintained the momentum created by our legends and produced sporting  greats whilst countries much smaller than us have taken to the task.

He was delivering the keynote speech as a special guest at the Second Sabuddhi Sports Literary Awards ceremony organized by Sabuddhi Lterary Circle (SLC) ,which was sponsored by SLT- Mobitel,  held at the Sports Ministry Duncan white Auditorium on last Friday (December 3)

‘’I still believe the Hon. Minister will focus on his mission in the same spirit as he started despite many distressing issues of complacency and delays in punitive action against wrong doers who are operating within the sports federations with personal agendas.’’ further he added.

The full text of the telecom chairman’s speech at the awards ceremony, as follows.

Today we are gathered at this iconic hall of fame to recognize and honour journalists of sports literature. It is pertinent today than ever before for sports journalists to play a crucial role in writing sports history and the ethics that have strengthened the character of a sportsman so that all sportspersons young and mature will embrace the principles of fair play and justice which are sadly lacking today not only in Sri Lanka but globally. Today, sports in general have become win by hook or by crook and for money and even loose when money demands so. It is a cancer spreading across all areas of sports and even sports administration.

As the keynote speaker I would like to make my speech carry a message of goodwill, sportsmanship and above all an appeal to conduct all sports affairs without corruption or manipulation. When I attended the first ever sports journalist’s awards ceremony, I was elated to speak in the presence of the new minister in charge where he started his tenure by example of non-interference. The newly elected national sports council contained many respected sportsmen of excellent quality led by Mahela Jayewardene. The NSC was given full authority to prepare operating procedures for disbursement of funds to sports federations and high-performance programs with accountability and transparency. This was never the case before. I still believe the Hon. Minister will focus on his mission in the same spirit as he started despite many distressing issues of complacency and delays in punitive action against wrong doers who are operating within the sports federations with personal agendas.

We are country of great sports people staring from the legendary Duncan white our first medal winner at the empire games and in who’s name this auditorium is dedicated. Later in our times the emerge of the fastest woman in Asia, great Susanthika Jayasinghe bagging a silver medal in Olympics and of course the evergreen Arjuna Ranatunga under whose captaincy SL emerged world beaters in cricket. That’s our history, sadly but also our national sports DNA. When you look around, talent is aplenty but there appears to be a big gap in harnessing talent and get these young people mobilized for development of their skills to win medals. Would you believe under a previous sports administration a project was started to build swimming pools and a vast number of pools were build island wide at exorbitant costs. Today we have more swimming pools than good swimmers. Most pools are abundant and to-date none has been held responsible for this colossal waste of national funds. You can obtain details from the Ministry of Sports on what I just mentioned.

It should be deeply analyzed by you the sports journalists as to what has gone wrong in our sporting capabilities and why we haven’t maintained the momentum created by our legends and produced sporting greats whilst countries much smaller than us have taken to the task. Perhaps our focus is more on cricket where the administrators regularly get bashed for irregularities. Our national sport Volleyball and other widely indulged sports, Athletics, soccer, Hockey and badminton have not made sufficient progress to make a mark in the Olympics or world games. What we found at the National Sports Council is lack of focus on training for winning and lack of discipline in adhering to diligent training protocols. The NSC together with the MOS is identifying the gaps for financial support and we sincerely hope these funds will be used for its r4eal purpose and not like the swimming projects where a good number of pools are waiting for water and swimmers.

We send large contingents of competitors, support staff, officials, reporters and friends of the National Olympic Committee (NOC) to major international events at colossal expenses to the state but finally end up as also rans. It has become most important to be included and accredited to be in the national contingent for international sporting events primarily as a joyride with scant respect for national duty. The accrediting authority for most international sporting events is the NOC and they pass on the costs to the Ministry of Sports but take no responsibility for any failure maintaining the position of an NGO limited only for accreditation. This is one of the reasons for large contingents of joy riders some even going about other businesses as reported recently.

Isn’t this part of a corrupt and manipulative system involving the Apex bodies of sports and the very bodies professing to eradicate all forms of manipulations in sports.  It is interesting to note that the NOC at the recently held AGM passed into law a clause to eradicate all forms of manipulation in sports. Why and how did they realize that there is manipulation on the eve of declaring elections to NOC EB. If you look at the last election you the sports investigative journalist would understand why. Do you think this piece of legislature would be revered by the top cats of the worlds topmost sporting body?  Or use the now famous excuse IOC to cover up all misdeeds which as per the one-sided process can only be decided finally in Geneva headquarters. The constitution also prohibits anyone from seeking redress from a court of law in Sri Lanka. It is further advanced now to ban federations and individuals even from criticising the Apex body with total disrespect to our judiciary. Mister Minister and the officials of the Ministry, our sports federations have appealed time and again to you against miscarriage of justice in elections conducted for sports federations. You the investigative sports journalist have regularly highlighted these issues, but unfortunately no credible action has been taken to correct these grave injustices. Today the office bearers of three prominent federations, Swimming, Handball and Cycling elected under independent election committee under the supervision of the Ministry of Sports which is the statutory body for all sports enshrined in an act of parliament are

In the same vein, several other federations taking the same path of electing office bearers under the supervision of the MOS are accepted. We can only conclude that the latter federations office bearers are inclusive whilst the others are excluded. Why haven’t the MOS taken objections as the statutory body separated from politics.

Then again, the fraudulent double draw of funds related to Rio Olympic games highlighted by the auditor general in his report in 2019 and given wide publicity appear to be swept under the carpet giving a clean bill to the top decision makers of the Apex body. We are puzzled, Mr. Minister.

I have often spoken of the removal of Mr. Dian Gomes on the pretext of coaching whilst the NOC accommodates several professionals of sports goods importers and coaches in their midst. The icing of the cake is the current president of the NOC desirous of contesting another term electing the independent election commission by him violating the basic principles of independence and accountability clearly stated in the constitution of the NOC.

Mr. Minister, I would like to state here for record that the Patron of the NOC is His Excellency  the President and these violations in operation by the NOC needs deep consideration and action deem necessary for prompt corrections come what may from the veiled threat of IOC being flagged. Unless and until the cleaning of the stables are done, I cannot see hope for the free spirit of the sportsmen to reach their objectives unhindered. I shall be a crusader from now on in the fight for justice and fair play in sports administration. I may be the lone wolf, but I will be more potent from outside that from within. You may interpret my statement anyway you like dear sports journalists but there is a strong group of dedicated people who will take the fight to the epicentre for a resounding victory assisted or not by persons we believed to be the guardians.

I thank  the organizers of this event led by Mr.Sirinama Rajapaksa and also the Ministry of Sports and the main sponsors SLT-MOBITEL.  My congratulations to the award winners !

Thank you and have a pleasant evening.