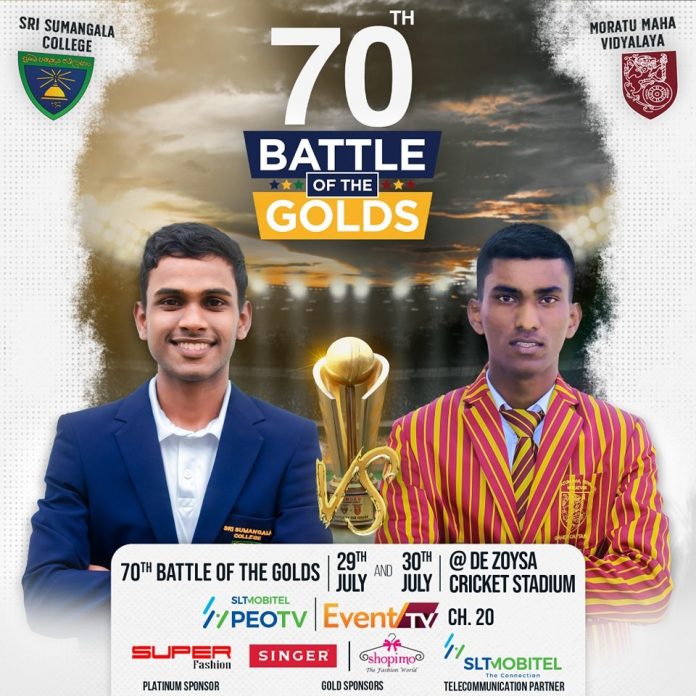 The 70th Battle of the Golds cricket encounter between Sri Sumangala College (SSC) and Moratu Maha Vidyalaya (MMV) will take place at De Soysa Cricket Stadium, Moratuwa on 29th and 30th July 2022 and the 29th One Day Encounter will take place on 31st July 2022.

The first encounter between the two schools dates back to 1934. Of the 69 big matches played between the two schools until 2021, Sumangalians has won 08 and Moraliyans 07, with the rest being declared draw. The first victory for Sumangalians was in 1962 while the first victory Moraliyans was in 1956. The one day encounters, which began 29 years ago in 1993, have resulted in 14 victories for Sumangalians, 11 for Moraliyans, 02 matches where no decision was taken and a match not played in 2001.

The 70th Battle of the Golds will therefore either continue to solidify the win enjoyed by the boys from Panadura or bring both teams to a tie. Sri Sumangala College in 2022 will be captained by Prabash Jayasekara. Madura Fernando will captain Moratu Maha Vidyalaya.

In the 2021/2022 cricketing season, Sumangalians have performed incredibly well. Sumangalians has played 7 matches in U19 Division II Tier A tournament and has secured 07 winnings while losing only 01 matches and became the Champions for the second consecutive year. Moraliyans has played 6 matches in the U19 Division 1 Tiear B tournament and has secured 4 wins and lost 2 matches.

Among the many successes of Sri Sumangala College, Iresh Pushpakumara’s 08 wickets in an inning in 2007 big match is the best bowling figure so far in the history and Roshan Wimalasena’s 153 in 1996 in the highest score in the history. In 1981 big match Ravin Wickramaratne set another record by scoring an unbeaten 104 runs and taking 5 wickets with a hat trick. Interestingly, Wickramarathna has also been elected as the Vice President of Sri Lanka Cricket in the recent past. A few other victories for Sumangalians include 1975 Captain Tissa Eleperuma representing Ceylon Team before the test status was granted, 1983 Captain Don Anurasiri being the first Sumangalian to present Sri Lanka’s test cricket team, who was subsequently followed by 1995 Captain Indika Gallage and 2001 Captain Dilruwan Perera.

A few other remarkable cricketers in the local playing field who began their cricketing career at Sri Sumangala include, Kaushal Silva before playing for St Thomas’s College; Kithruwan Vithanage before joining Royal College, Colombo and U13 and U15 Captain Oshada Fernando before joining St Sebastian’s College, Moratuwa.

Sri Sumangala College, in Panadura, Sri Lanka, was founded in 1909 at Rankoth Viharaya in memory of Ven Weligama Sri Sumangala Thero, who played an important role in Buddhism in the island result of the Panadura Vadaya. One of the oldest schools in the country, this national school is one of the largest Buddhist schools in Sri Lanka, with a student population of over 4000 in 13 Grades.

In 1924, Sri Lanka Bauddha Samithiya Ltd, was founded by MJC Fernando as Chairman with the objective of establishing a Buddhist school to uplift Buddhist Education in Moratuwa. Then Governor of Ceylon Sir Herbert J Stanley laid the foundation stone for the College in June 1929 and on 19 January 1934 Moratu Vidyalaya was declared open with 67 students enrolled.