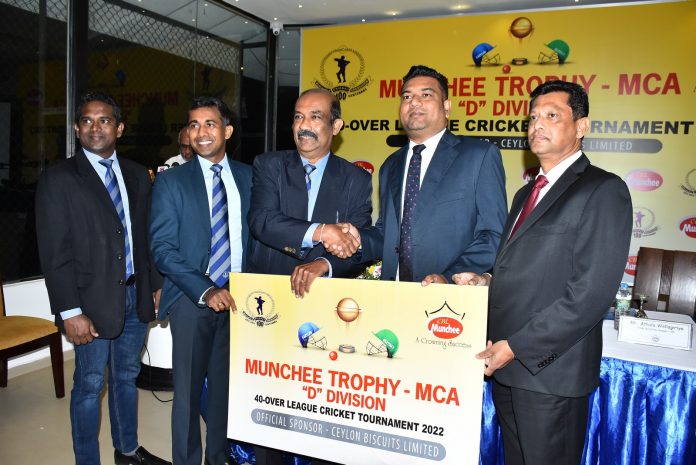 Ceylon Biscuits Limited (CBL Group) the pioneer food manufacturer, who has won many accolades during the recent past will continue to sponsor  the Mercantile Cricket Association (MCA)  “D” division 40 over League Cricket Tournament 2022 for the second year running.

The tournament which is in progress is conducted with  09 teams, pooled into 02 groups  contested for the  “CBL – Munchee”  Trophy.

The tournament is conducted in 02 stages consisting  23 matches including the Final.

Special Awards on offer are: for the Best Batsman,  Best Bowler, Man of the Final & Man of the Series.

The Player Control Team : (PCT)  All matches will be officiated by MCA appointed Match Referee,  on the field Umpires are assigned by the Association of Professional Cricket Umpires (APCU) & the score board Scorers assigned by Sri Lanka Cricket Scorers.

The official match ball :  Matches up to the Final is  played with the Royal Malik / The World of Cricket – Red Ball with the MCA Logo.

At the moment the tournament has completed its league stage and the  following 08 teams have advanced to the knock-out stage.

The Quarter Finals will be worked off this week-end, 22nd & 23rd January, the Semi Finals on 29th January & the Final at the MCA Grounds on 05th of February 2022.