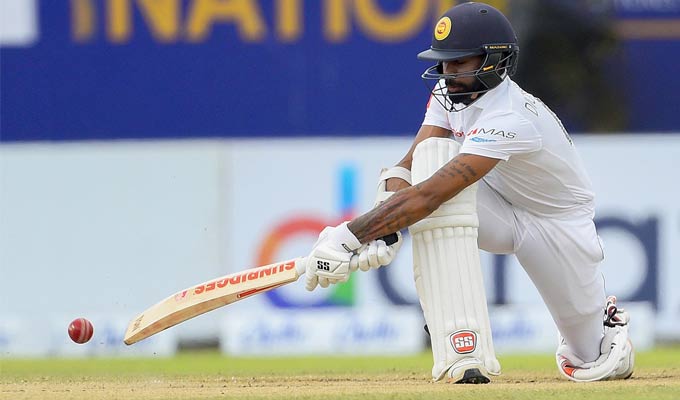 Niroshan Dickwella scored a calculated 61 to guide Sri Lanka to an 18-run first-innings lead in the first Test against New Zealand in Galle.

Resuming on an overnight 227 for 7, Sri Lanka added 40 to their tally before Trent Boult and Will Somerville took the remaining three wickets about an hour before lunch on the third day.

New Zealand took the new ball immediately and Boult pushed the batsmen back with a barrage of short balls. While Suranga Lakmal was struck flush on his right elbow, Lasith Embuldeniya copped a glancing blow on the helmet.

Two balls after being hit, Lakmal stood deep in the crease to a ball that wasn’t short enough and wound up dragging it back onto the stumps for 40, snapping an 81-run eighth-wicket stand.

At the other end, Dickwella was more competent against the short ball, often rolling his wrists to keep the ball down.

He reached his half-century in the 88th over when he dinked Ajaz Patel to the leg side for a single. Four overs later, Somerville dangled one up outside off – wider than a set of stumps outside off – and had Dickwella slapping a catch to Kane Williamson at short cover for 61 off 109 balls.

Somerville then pinned Embuldeniya in front to end the innings and leave the game fascinatingly poised with the Galle track yet to deteriorate.