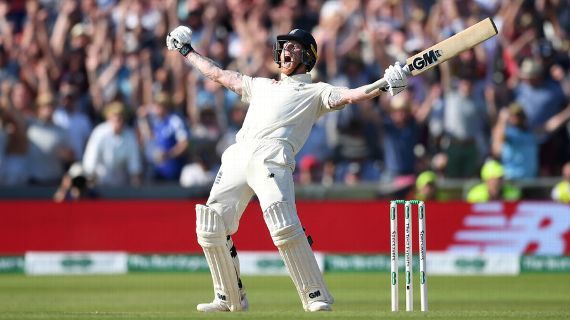 A day that began full of possibility flipped and flopped and flipped again on the balance of probablility and ended with an air of impossibility as England kept the Ashes alive, thanks to Stokes’ match-winning century. His unbeaten 135 handed England the most unlikely of victories, by one wicket, in the third Test at Headingley, allowing them to level the series at 1-1.

In one of the most thrilling finishes imaginable – well, since England’s World Cup triumph last month with, you guessed it, Stokes, front and centre – he and Jack Leach stood up against the odds and steered their side to their highest successful run chase in Tests, two days after they had been humbled for 67 in their first innings and were then set 359 to win.

Numerous times Australia threatened to take the final wicket they needed for a victory that had seemed inevitable, only to fluff their lines repeatedly.

Stokes was dropped on 116 when he sent a top edge off Pat Cummins towards third man, where Marcus Harris got his hands to it but couldn’t hold on. Australia then wasted a review – which would come back to haunt them – when Cummins rapped Leach on the pad and the DRS confirmed the ball had pitched well outside leg.

When Stokes just cleared the man on the rope for a six off Nathan Lyon, the crowd went wild and England needed just two more to win. Two balls later, Leach should have been run out after going for a non-existent single, but Lyon fumbled as he tried to gather the throw from backward point. Stokes should have been out lbw attempting to slog-sweep the very next ball, which was pitching on middle and leg and shown by Hawk-Eye to be hitting the stumps, but with no reviews left, Australia could do nothing.

The hosts had dared to dream when they resumed on a hot summer’s day at 156 for 3 with Joe Root unbeaten on 75 and Stokes locked and loaded having faced 50 balls for his 2 not out.

Cue the possibility. These two batsmen at the crease – Root with a point to ram home after going some way to answering critics of his batting, captaincy and combination of both, and Stokes with a fifty and a Man-of-the-Match century to his name in the previous two Tests – were fully capable of bringing England within reach of the 203 runs still needed to clinch victory.

Cue the probability. Australia’s attack, while frustrated on the third afternoon, had kept the pressure on and, with the second new ball due after eight overs on day four, England faced a big task just to navigate the morning, let alone chase down the target. That became even more unlikely when Root fell, having added just two runs, to a brilliant slips catch from David Warner – his sixth of the match – off the bowling of Lyon in the sixth over of the day.

Stokes and Jonny Bairstow swung the probability back in England’s favour with a defiant, and threatening, 86-run partnership. Their union was broken when Bairstow, on 36, attempted to cut Josh Hazlewood but guided the ball to Marnus Labuschagne at second slip.

Cue the impossibility. Stokes’ knock, which included 11 fours and eight sixes, also saw him farm the strike expertly, while England No. 11 Leach deserved huge plaudits for holding his nerve in a 76-run partnership with Stokes off 62 balls, to which Leach contributed 1 off 17. Only once in the history of Test cricket – actually only a few months ago, in Durban – has a last-wicket pair scored more to secure victory.

Stokes had looked like running out of partners. Jos Buttler, initially called through and then sent back by Stokes, was run out to a direct his from Travis Head, Chris Woakes chipped Hazlewood straight to Matthew Wade at short extra cover, Jofra Archer holed out after a brief cameo and Stuart Broad was out lbw to a James Pattinson yorker.

As Stokes neared his century, Hazlewood – who was one wicket away from claiming 10 for the match – returned to the attack. Stokes proceeded to take 19 off the over, bringing up his ton with a four hammered through wide long-on, and following up with consecutive sixes.

Stokes admitted there were moments when he wasn’t part of the action that he couldn’t watch. Leach levelled the scores with a single off Cummins and when Stokes brought up the win on the next ball, flaying Cummins through the covers to the boundary, he let out an almighty roar, arms outstretched as Leach ran to embrace him like the saviour he was.

It seemed like so long ago that Stokes had toiled with the ball for 24.2 overs to claim 3 for 56 in Australia’s second innings, when Labuschagne top-scored for the tourists for the third time in as many innings with 80. It made Stokes’ feats with the bat all the more remarkable.