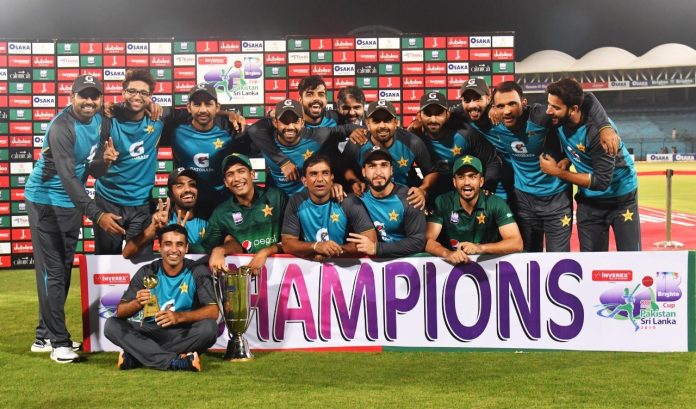 Pakistan clinched the three-match ODI series 2-0 after defeating Sri Lanka by five wickets in the third and final ODI at the National Stadium Karachi on Wednesday.

Amir struck the first blow in just the third over, making Fernando (4) nick one back to Sarfaraz Ahmed at the total score of 13.

Unlike the second ODI, the early setback did not result in a spree of wickets as Gunathilaka and Lahiru Thirimanne stabilised the Sri Lankan ship and took the side to a decent 74-1 at the end of 15 overs.

The impressive Gunathilaka completed his 50 in the 17th over as the stumps microphone caught plenty of Sarfaraz’s frustrated comments.

The elusive second wicket finally came in the 20th over when captain Thirimanne (36) was out caught-and-bowled by Mohammad Nawaz.

At the halfway mark, Sri Lanka were 122-2, with Gunathilaka eyeing a century for himself and a big score for the hosts.

The fourth Sri Lankan wicket fell to Shinwari who had Angelo Perera (13) caught at midwicket.

Gunathilaka brought up his 100-ball 100 in the 32nd over and hit Amir for a four over the bowler’s head. It was just his second career ODI ton.

Haris Sohail dropped the easiest of Gunathilaka’s catches in the 42nd over but Iftikhar Ahmed made no such mistakes when Shehan Jayasuriya skied one in the very next over. Sri Lanka were five down at this stage but with Gunathilaka at the crease, a 300-run score was still not out of reach.

Gunathilaka, the danger man, however, had his stumps shattered by Amir in the 45th over. He departed having scored 133 runs off 134 balls and leaving his side down six.

Some more wickets tumbled but Dasun Shanka’s 43-run cameo, which ended on the final ball of the innings, made sure that Sri Lanka finished at a respectable 297-9.

In reply, Fakhar Zaman and Abid Ali opened Pakistan’s run chase, with both opting to stay quiet in the first few overs. That changed in the third over when the stylish Abid found back-to-back boundaries.

While Zaman, as was the case in the second ODI, began tentatively, his partner Abid was taking charge, punishing every lose ball hurled his way.

With him catching fire, Pakistan completed their 50 in the 9th over while Abid marked his own just two overs later. The half century took him just 37 balls.

Abid was given a second life in the 12th when he mistimed a juicy full toss but Sadeera dropped an easy catch behind square.

The opening wicket finally fell in the 20th over when Abid was adjudged out lbw by Wanindu Hasaranga. His 74 off 67 balls had laid a strong foundation for the hosts.

Babar Azam joined Zaman in the middle and in the very next over the latter completed his second straight 50 of the series.

The duo formed a 58-run partnership before Azam (31) was trapped in front of the wickets. Pakistan were 181-2 at this point and, with 20 over and change still to go, were in a strong position.

Surprisingly, the skipper promoted himself up the order and walked in at number four.

Pradeep made Zaman his second prey of the night by having him caught at third man. The left-hander scored a slightly laborious 76 off 91 balls.

In the meantime, the 200 came up in the 34th over. Sarfaraz and Haris Sohail kept the scoreboard ticking and took the team to 237 at the end of 40 overs.

Just when things were about to look comfortable, Lahiru Kumara had Sarfaraz edge one to his stumps — a massive blow the hosts.

Just when things were about to look comfortable, Lahiru Kumara had Sarfaraz edge one to his stumps — a massive blow the hosts.

Sohail chipped in with a 56 but was out with the victory in sight. Iftikhar Ahmed took over from him and eventually got the job done in the penultimate over.