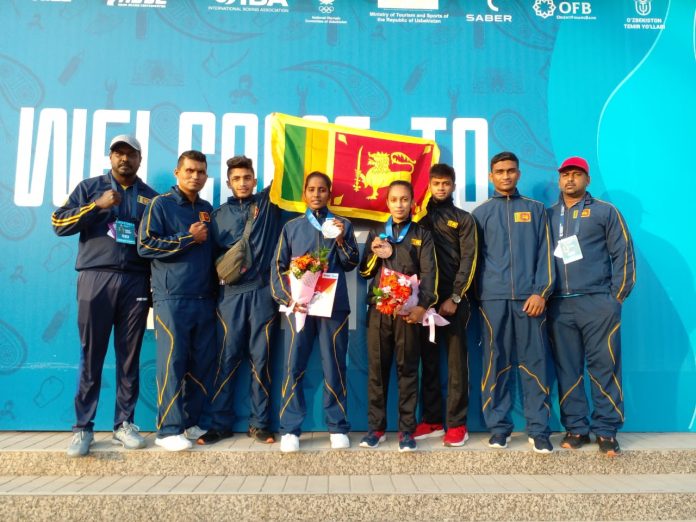 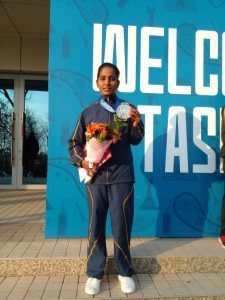 Sri Lanka’s girls bagged a silver and bronze medal at the first ever ASBC Asian U22 Boxing Championships held from 20th to 30th January 2022 in Tashkent, Uzbekistan.

UthpalaSewwandi featured in the gold medal clash in the light fly (50kg) weight class against Uzbekistan’s Sabina Bobokulova who was the gold medal winner at 2019 Asian Junior and 2021 Asian Youth Championships. Uthpala entered the finals after receiving a walkover from Hikaru Shinohara in the semifinals, due to an injury and found the 18-year-old Uzbek talent Bobokulova too strong in the title clash.Southpaw Bobokulova who defeated Mongolia’s IBA Women’s Youth World Boxing Championships bronze medalistAltanbekKhulan by a unanimous decision in the semifinals, stunned the Sri Lankan with a powerful right almost at the bell in the opening round.Uthpalamade a valiant attempt to step up the tempo against the confident Uzbek who beat the Sri Lankan boxer to win the gold medal.

Sri Lanka’s bronze medal came in the women’s fly (52kg) weight class where IsharaMalshani lost in the semi-finals to the eventual silver medalistRinka Kinoshita of Japan. An experienced campaigner who has been boxing since the age of 13, found the Japanese southpaw who was the bronze medalist of World Youth Championship too hot to handle. Kinoshita, who lost a unanimous points decision against FeruzaKazakova of Uzbekistan in the final.

KavinduSanjaya (48kg) and LasinduEranda (51kg) gave a good account of themselves but were outpointed in the quarter finals by opponents from Pakistan and Iraq respectively.

Sri Lanka were represented by a five-member team comprised of 3 men and 2 women in this inaugural U22 tournament which saw 109 boxers from 12 countries taking part.